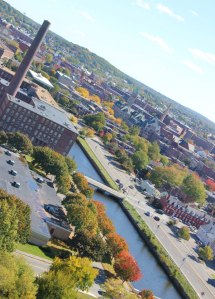 Sustainability. It’s a buzzword. Everyone is using it. But . . . what the heck does it mean?

It means looking at the big picture — adopting policies today that will serve you well into the next year, decade, century. It means a better today, and a better tomorrow.

For more than a year the city’s Department of Planning and Development has been collecting information from other city departments, institutions and businesses and residents through visioning sessions, telephone surveys and online to put together an updated version of the city’s 2003 Comprehensive Master Plan.

The result: Sustainable Lowell 2025, a blueprint to guide the city through the remainder of the first quarter of the century. Monday night a public session was held at Alumni Hall at UMass Lowell to discuss the draft plan and gather further input to be used to craft the final plan, which is expected to be presented to the City Council and Planning Board later this winter.

“This wasn’t a plan created by a handful of people in the Planning Department throwing ideas around,” said Neighborhood Planner Allegra Williams, who along with Senior Planner Aaron Clausen hosted the session, which was attended by more than 60 people.

The plan is broken into eight action areas:

The city will hold another Sustainable Lowell 2025 input session Wednesday January 9 at 6 p.m. at the Lowell Senior Center on Broadway.

Comments on the plan will be accepted through January 15 and can be sent to Allegra Williams at awilliams@lowellma.gov.