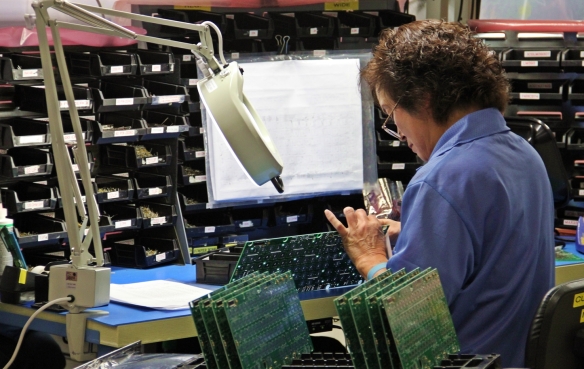 Manufacturing remains very much alive in the Mill City.

Tucked away on Technology Drive off of Drum Hill is a company that is making SERIOUS keyboards. Yes, keyboards.

Cortron, founded in 1969, designs and manufactures rugged keyboards used by the U.S. Armed Forces as well as NASA. Their work can be found in submarines, fighter jets and in outer space. The company had been located in Lowell, on Walker Street, until moving to Methuen in the late 1980’s.

Last year, the company, with the assistance of City of Lowell Office of Economic Development Director Theresa Park, found their new home at 59 Technology Dr. They were looking to buy rather than continuing to lease space as they had in Methuen.

Their products are tested to military standards to withstand temperatures from 40 degrees below zero to 140 degrees, 90 percent humidity levels, and the pressure changes and vibrations associated with air and space travel.

All products are designed, manufactured, and tested in Lowell by the company’s 45 employees.

Debbie’s job is to test each key of each keyboard to make sure they don’t stick or feel “mushy.”