He executed search warrants, rounded up suspects and shut down enterprising drug dealers, large and small, throughout Greater Lowell as a detective in the Special Investigations Unit in the 1980s.

“But, for every drug operation we closed down, there was always another waiting to take its place,” recalled Bill Taylor, shortly after being sworn-in as the 35th Superintendent of the Lowell Police Department. “Community policing found triumphs where undercover work and battering rams would not.”

During the 1990’s when then-Superintendent Ed Davis, implemented the community policing method in the city, Taylor saw first-hand, as the sergeant in charge of the Acre and Belvidere police neighborhood precincts, how having more officers walking a beat on foot or riding a bicycle, building relationships with residents and business owners not only deterred crime, but also the perception of crime.

“I pledge to the people living and working in the city you will see the return of walking and bicycle officers to our neighborhood streets,” Taylor said Monday morning, adding he will also continue to focus on “smart-policing” principles, using data to strategically deploy personnel.

That strategy will also involve working in collaboration with the city’s Fire, Development Services, and Planning departments, as well as the Department of Public Works to identify and clean-up crime hot spots in the city, Taylor added, pointing to the work that has been done in Jacksonville, Florida as an example. 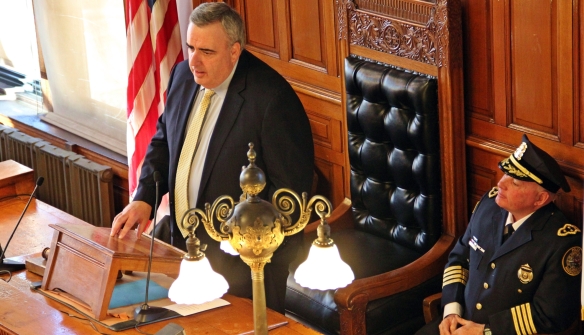 Davis, who recently retired from his position as the Commissioner of the Boston Police Department, said he, Taylor  and other police officers of their generation “stand here as a bridge” between the old and new ways of approaching police work.

When Ed Davis and Bill Taylor and Ken Lavallee were young cops, they were patrolling places like the Laconia Lounge and other places where they knew there was crime. In the 1970’s policing was more reactive, more about making arrests than preventing crime.

When Davis became Superintendent of the Lowell Police in the 1990’s he ushered in the era of community policing, adding police to the neighborhoods and opening police substations. The result? A 60 percent reduction in major crimes.

Today, police work involves not only the basic tenants of investigation and problem solving, but knowing how to best utilize data and social media.

“He has the intellect to understand the changes,” Davis said of Taylor, one of the first members of the Lowell Police Department to fully embrace social media sites like Twitter and Facebook.

Side note: Taylor read his speech Monday, not from a printed sheet of paper, but off his iPad.

Davis and Taylor did not meet at roll call. The duo worked together as teenagers at the Market Basket in the Sunrise Plaza on Bridge Street in the city’s Centralville neighborhood.

“Bill was way ahead of me back then – he was in grocery, I was a bagger,” quipped Davis.

Davis left Taylor Monday with a piece of advice gifted to him by the late U.S. Sen. Paul Tsongas: “You need to set goals. People need to know what your goals are and they will respond to them.” 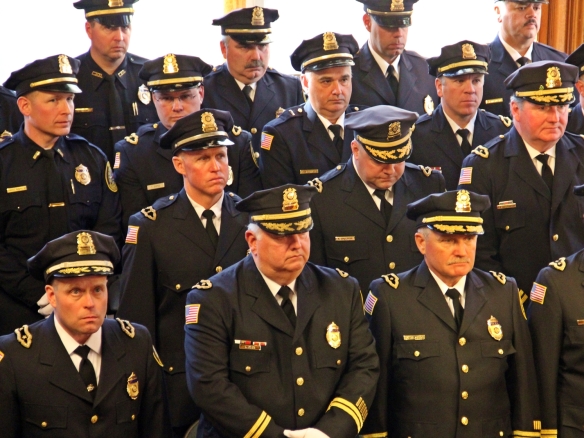 Many of the speakers at Monday’s event, noted the depth of internal candidates City Manager Bernie Lynch had to choose from inside the Lowell Police Department in choosing a permanent replacement for retired Superintendent Ken Lavallee.

Lynch said his decision was difficult, but in the end it was a “great pleasure and honor” to choose Taylor to lead the department due to his intelligence, commitment to the community and his understanding of the importance of setting goals and strategies, as well as the fact he understands the importance of community policing and the opportunities presented through technology to use  data to make wise decisions in utilizing personnel.

“He does understand the future of policing,” Lynch added.

“It’s an honor to work with you” Taylor said in addressing the LPD command staff, including the two Deputy Superintendents – Arthur Ryan Jr. and Deb Friedl, who served as Interim Superintendent since Ken Lavallee’s March retirement. “Our department certainly cannot succeed without the leadership and guidance you provide.” 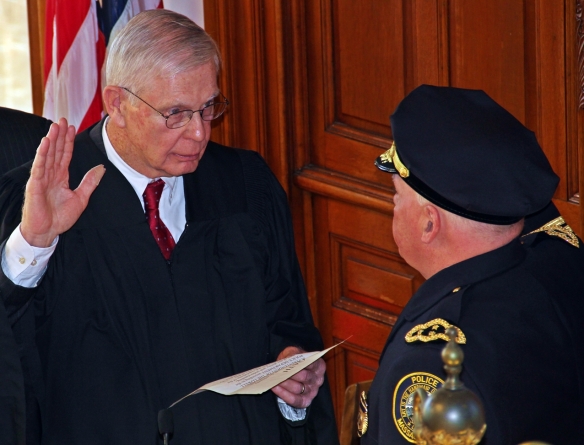 Ryan said she has known taylor since he was a detective in the Special Investigations Unit in the 1980’s and knows he will continue the deep, rich partnership between her office and the LPD.

“This is a wonderful appointment,” Ryan said, citing Taylor’s varied experience. “Superintendent Taylor comes to this position having done nearly every job in the department.”

“Superintendent Taylor, your reputation for efficiency, professionalism, and fairness is what Lowell needs now,” added Donaghue. “The job ahead of you is a large one, but I trust and know you are up to the task.”

Taylor, 56, of Dracut, is a 31-year veteran of the Lowell Police Department. He was joined Monday morning by his wife, Karen and children Alena, 26, Patrick, 22 and Victoria, 19. 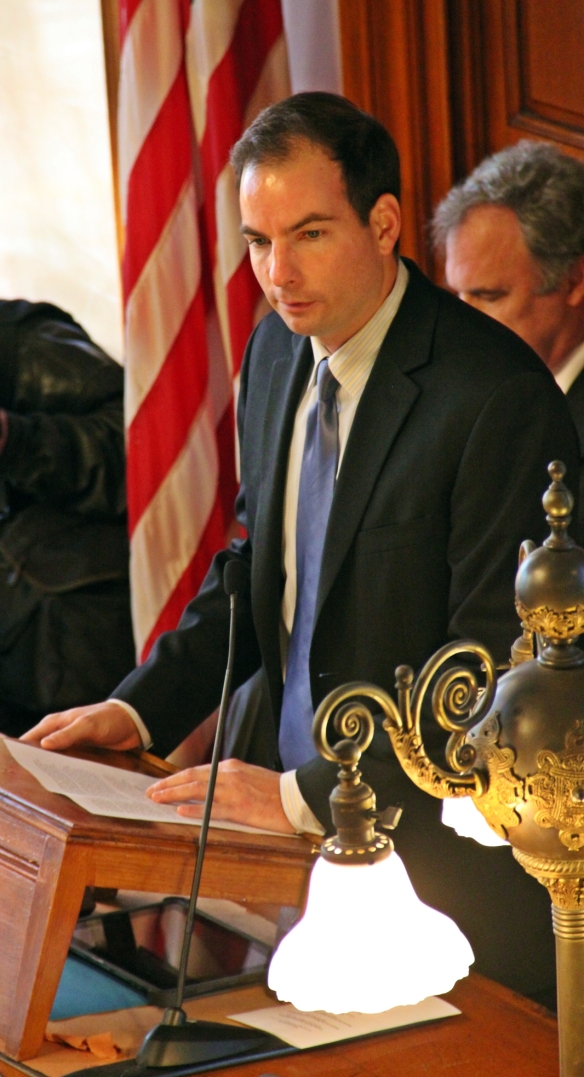 Good morning. Let me first begin by acknowledging former Police Superintendents Ken Lavallee and Ed Davis for their service to our city.  And Deb Friedl also deserves our appreciation for the job she has done as acting superintendent.  Each of these people has led the department with distinction. Many others, well qualified, have sought the position, and we thank them for their continued commitment to our city. Lastly, we thank all the officers who do the job of protecting us.

Much talk has been made of late, of concern around the city for the safety of our citizens. Indeed, this should always be our concern.  And while many of the statistics show violent crime trending in the right direction, the feeling of people–the fear–is still there. And so the challenge for the leadership in this city is not only to reduce crime and violence, but also to reduce the fear of crime and violence. Because if less people feel free to walk and bike our streets, to play in our parks at every hour of the day and into the night, are instead frightened in their own neighborhoods and homes, then we will have, in fact, streets and parks and neighborhoods that are less safe to walk and play and live in.

There is also much talk of adding more police officers to address the fear. In the near term, this will certainly help. But is important to recognize that a larger police force is merely a means to an end–that in the end, what we want is a safer community, a place where we are not responding to the worst, not even where we are fixing broken windows to prevent more serious disorder, but where we have created a more caring built and social environment in which the impulse to break windows or commit crime is itself stunted.

We are lucky today to swear in a highly professional and thoughtful leader who understands the importance of community policing and smart policing, the relationship between police and community planning, the use of data to drive decision making, and is, most of all, mindful that he has been asked to contribute to part of larger task.

For building peace in our city is not simply the responsibility of the superintendent, or any single department, or even solely of city government, but of the whole community–businesses, non-profits, churches, children and parents and all residents. We can all nevertheless take great confidence from the selection of William Taylor as our Superintendent.  In his life, he has risen to meet many challenges, and will continue to do so. We offer him our congratulations and our support.

3 thoughts on “Taylor Made (to be Lowell Police Superintendent)”